Headed out early with perfect conditions, light wind and small seas. First stop was about 30 miles out on a big weed patch, we were hoping to get a dolphin but all we caught was about a 4 foot barracuda ,at least it was a good fight with 3 good jumps. Next stop was all the snapper we wanted so we caught a quick limit and moved on to the next spot where we were looking for amberjack but only caught more snapper, one of my guys was reeling in about a 6 lb snapper when all the sudden the pull got a lot harder, my guess was a shark bit our snapper and I was right. Ended up catching 3 big bull sharks, caught one in the tail and that makes it tough to get them to the boat. Last spot of the day was at a oil rig and there was a commercial boat catching snapper 10 at a time ,I think we caught one undersize amberjack, 3 nice ling,3 kings ,and a rainbow runner. I was going to get some pics back at the marina but with the big Poco Bueno tournament going on it was all we could do just to get the boat loaded, fish cleaned, and get out of there. 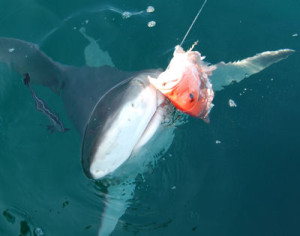 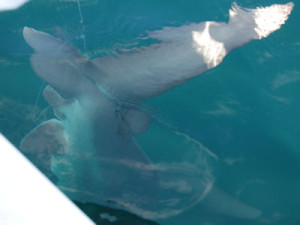